The word chakra is a Sanskrit word which is derived from the verb car ("to move"). There are several literal meanings of chakra:
wheel
circle
center

Besides the literal meaning there are also some esoteric meanings:

"There are seven basic vibratory rates (bodies) which we use to progress from very basic energies to the very highly developed superhuman levels." Paulson, Kundalini and the Chakras, pg. 35.

Vyasa comments that during single-pointed meditation, which is fixation on a single point (desabandhascittasya dharana), that the concentration is usually on the center, or chakra, of the navel, on the lotus of the heart, on the light within the head, on the tip of the nose, on the tip of the tongue, or on any external place or object.
In the Rg-Veda and the Upanishads there is an identification of the body and the cosmos. Eliade [Ref: Eliade, Yoga, pg. 117] called these identifications micro-macrocosmic homologies. He mentions three:
1.the cosmic winds will be "mastered" as breaths
2.the cosmic skambha-pillar will be identified with the vertebral column
3.the "center of the world" will be found in a point (the "heart") or an axis (traversing the chakras inside the body.

Within the Bodhi Reference Model we use the terminology Body Metaphors for micro macrocosmic homologies although we will mean, essentially, the same thing.
Consider some of the language used to describe the Chakras:
as a flower
as a whirling vortex of living energy
as a point object emitting vibratory energy
as a pulsation in the human energy field
as nerve complexes or ganglia

Here is a picture: 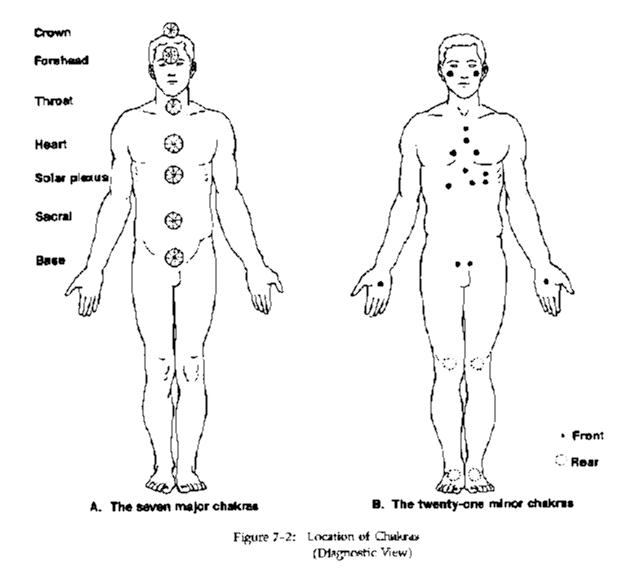 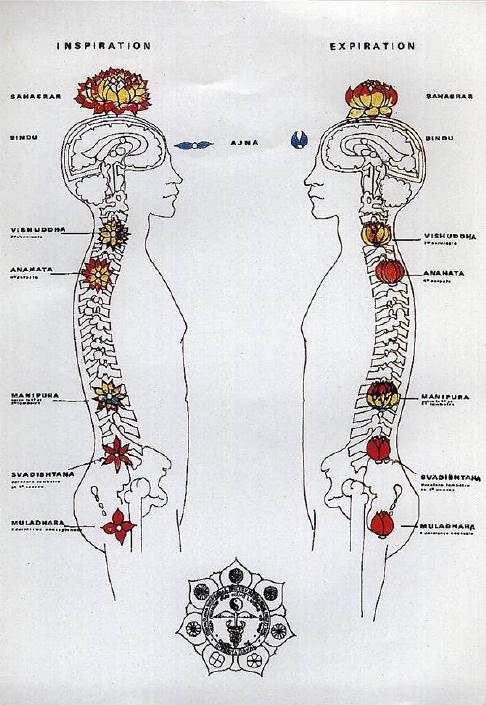