Since time immemorial holy personages have been represented by a surrounding light, and long before the Christians circled the heads of their saints with halos in paintings, the early Egyptians, the Greeks, Romans and Indians depicted fringes of radiance shining from the bodies of their deities; the aura of Buddha was believed to envelope a whole city.

In the 1850's the German chemist Baron Karl von Pheichenbach became interested in the paranormal and started experimenting with various psychic friends, coming to the conclusion that people radiated a force that particularly sensitive persons could see and feel in the dark. He called this force od, from which came the term "odic force" a form of body magnetism which many at the time were pleased to believe explained away the root of spiritualists' ectoplasm, their power to move furniture, speak in a multitude of voices and make a good deal of frightening noises.

Though a Yugoslav scientist, Nikola Telsa became interested in the subject some thirty years later and invented a wire coil device that caused the body to spark, it was not till 1911 that someone decided to research the possibility that this divine mythical light could in fact be explained as an electric current produced by the human body.

A British doctor, Walter Kilner discovered that by looking through colored glass screens he could see a definite band of light (six inches wide) emanating from the body. He further discovered that the band of light changed shape and color depending on the health of the subject and realized its immense potential for diagnostic purposes. By inventing a glass screen that hermetically sealed solutions of dycyanin dyes, he was able to percieve a misty light around the head and shoulders and hands of human subjects when he stood them against a black background. In his book, "The Aura", Kilner describes the luminosity appearing in three layers, the innermost of which he refers to as "the etheric double," the middle the "inner aura," both surrounded by the "outer aura." The whole aura, he found, was sensitive to magnetism and electric current, which, when applied, vanished to reappear again with greater intensity. Not everyone was able to see Kilner's auras. As an explanation, he claimed that he was perhaps more sensitive to auras than others.

In Krasnador, southern Russia, near the Black Sea, lived an electician, Semyon Kirlian. He was an extremely competent man and his services were often called upon by researchers working at the local hospital to repair the various pieces of equipment when they malfunctioned. In 1939, while in a  laboratory, Kirlian was present during a demonstration of a new high frequency electrotherapy unit. As the patient received the treatment through electrodes, Kirlian noticed minute flashes of light sparking between the person's skin and the electrodes themselves. An amateur photographer, fascinated by the infinite possibilities offered by a photographic plate, he wondered whether it would be possible to record these minute skin flashes. He realized that since the electrodes were made of glass for safety, the photographic plate would be ruined by exposure to light before the unit could even be switched on, so he decided to use metal electrodes; though this was clearly dangerous. Placing his own hand in the right position after adjusting the photographic plate, he switched on the power, was instantly and painfully burnt, but hoped that after the three seconds he had exposed the plates, he might have an original photograph. When the plate was developed he saw a very strange imprint. Around the contours of his fingers a luminosity had been recorded.

He set to work developing a machine that would photograph this apparent aura. The known techniques of photography without light -X-Ray and infrared - be of no use, so he devised a process that would only catch this new luminous energy emanating from the body. Helped by his wife, Valentina, a journalist and teacher, he eventually found a method of taking the pictures he wanted and his first successful result was the photograph of a leaf revealing, around its edges, millions of light energy dots flaring in turquoise and orange patterns from the direction of the leaf's veins. When he similarly photographed his own finger, it appeared on the picture like an erupting volcano, flames of energy sparking from the tips. 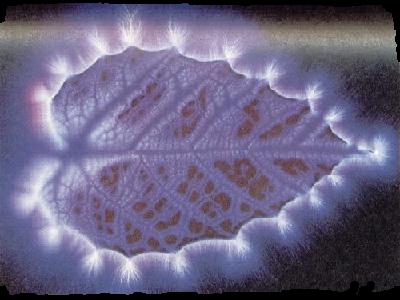 As these were static pictures, the husband and wife team went on to perfect an optical instrument that would enable them to see their discovery in motion and, according to the Ostrander and Schoeder report in "Psychic Discoveries Behind the Iron Curtain":

"The hand itself looked like Milky Way is a starry sky. Against a background of blue or gold, something was taking place in the hand that looked like a firework display. Multicolored flares lit up, then sparks, twinkles, flashes. Some lights glowed steadily like Roman candles, others flashed out then dimmed. Still others sparked at intervals. In parts of his hand there were little dim clouds. Certain glittering glares meandering along sparkling labyrinths like spaceships traveling to other galaxies.

"When the Kirlians placed a fresh leaf under the lens of a microscope connected to the high frequency generator, they saw a picture similar to that of the human hand. Next they tried a half withered lead. It looked like a great metropolis turning out its lights for the night. They tried an almost completely withered leaf. There were almost no flares and sparks and "clouds" scarcely moved. As they watched, the leaf seemed to be dying before their eyes and its death was reflected in the picture of energy impulses. "We appeared to be seeing the very life activities of the leaf itself," Kirlian said, "intense, dynamic energy in the healthy leaf, less in the withered leaf, nothing in the dead leaf." 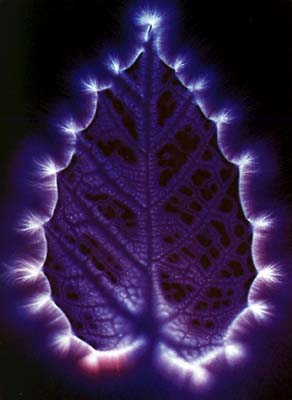 This Kirlian discovery soon made scientific news and, with the backing of the Soviet Academy of Sciences, they elaborated further on their machines and carried out endless experiments. What they proved was what mediums had been saying for years, that living matter has an aura, and that that aura is affected by frequencies of energy governed by the state of health of the subject. Fatigue, poor states of mind, anxieties and illnesses all contribute to the behavior of the aura.

Psychics who can see auras all seem to agree that the luminescence around the human body is egg-shaped, wide around the head and shoulders, tapering towards the feet.

In the famous book, "The Teachings of Don Juan: A Yaqui Way of  Knowledge" by Carlos Castaneda (written when he was a graduate student at the University of California), this egg-shapes aura is briefly but interestingly mentioned. In 1960, Carlos Castaneda first met Don Juan, a Yaqui Indian feared and shunned by the ordinary folk of the American Southwest because of his unnatural powers. During the next five years Don Juan's arcane knowledge led him into a world of beauty and terror, rules by concepts far beyond those of Western civilization. Using psychedelic drugs -- peyote, jimson weed and mushroom humito -- Castenada lived through encounters with disembodied spirits, shamans in the form of huge wolves, and death in the shape of silver crows. Three times he met Mescalito, the god of peyote; finally, after a night of terror in which he realized his life was threatened by forces which he still cannot fully explain, he gave up the struggle to become a Man of Knowledge -- to find the other you -- but wrote his remarkable book in which Don Juan tells him:

"I like to sit in parks and bus depots and watch. Real people look like luminous eggs when you "see" them. In a crowd of egglike creatures you can spot the one who looks just like a person, then you know that there is something wrong and that, without this luminous glow, this is not a real person at all."

Having accepted that all living matter is surrounded by a field of force that can sometimes be seen or photographed as an aura, there is also the aura that is perceived by psychics that differs slightly in that it is colored by the thought processes of the subject. This coloring ranges from fine violet, blue hues to yellows, dark browns, grays and dull reds. Sometimes the auras shine with a pure golden light, which, if some of the interpretations put on color can be proved to be correct, signifies spirituality. Pale blues and purples are interpreted as the given power of healing.  Pink for pure love and affection. Red for desire and anger. Green for intellect. Browns and muddy shades going to grays signify disease. An aura which appears to be shriveling suggests approaching death.

These colors, however, are not always reliable symbols and should not be applied as hard and fast rules. What matters most in the aura is its clarity and purity of colors that indicates stability, or instability in the subject's character. Blues merging into reds merging into grays like a dirty artist's palate is suspect. A clear yellow outlined by a pure green is sounder.

The acquisition of auric sight, like all other paranormal faculties, is a question of practice and patience. Compared to other forms of psychic powers it is, however, relatively simple to try out, providing you give yourself time and do not limit yourself to only one or two experiments. Auric sight is one of the faculties which may indicate that you can develop other powers in the psychic field, but apart from this, and possibly confirming that a person is physically or mentally unwell because of the poor state of their aura, auric sight can only be regarded as a fascinating additional and supernatural dimension.

~ from Maat's Book of Shadows
based on information found in: The Other You: How To Develop Your Psychic Potential by Andrew Laurance (C) 1986 Javelin Books/US Sterling Publishing Co., Inc